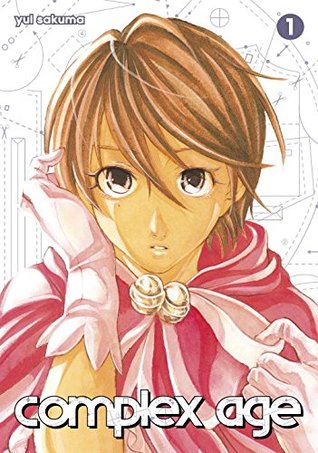 Complex Age follows Nagisa Kataura, as she tries to juggle a serious office job with her secret passion for cosplaying.  However, this general summary for the series (and the one that drew me in on the blurb) doesn’t really have too much to do with volume one – I thought the first volume focused much more on setting the scene of what cosplay was and how Nagisa fit into that world.

I have to be honest here and say I felt very underwhelmed by the book.  Nagisa wasn’t particularly likeable, and it often felt like she was more of a side character – her friend Kimiko and the new friends they make seemed to be much more interesting!  I really love comic conventions, so I was hoping I would find the cosplay themes enjoyable, but I actually got bored quite quickly with no discernible storyline, and I couldn’t relate to Nagisa’s obsession with cosplay perfection at all.

However, the story did cover some elements of cosplay that I had never really considered before.  For example, Nagisa had to deal with insecurities about herself – it was sad to see her so anxious about her age, and it was unsettling to see unsavoury photos of her posted online and the nasty comments attached (though she did manage to laugh them off, at least).  The book was very educational in this sense, and also offered definitions of cosplay terms, and information about how the photography side of things worked too.

I should add that the size of the book is a little misleading – there is actually a second story at the end, which is the original one-off comic that Yui Sakuma wrote that inspired Complex Age.  Funnily enough, I found it much more interesting, finding the characters and plot very engaging.  Sawako, the star of this short story, wore some beautiful dresses, which must have been great fun to design (and difficult to draw, no doubt!).

I don’t think I’ll be reading the rest of the Complex Age series (they seem to cost above the usual average for a manga book, too), but I’m sure cosplayers and those interested in the culture would still get something out of reading it.