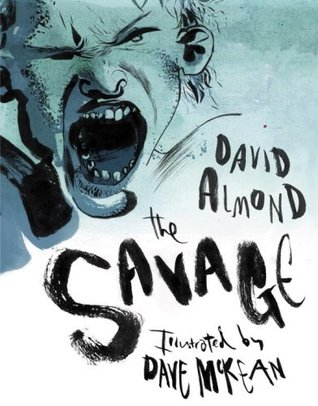 “You won’t believe this but it’s true.  I wrote a story called “The Savage” about a savage kid that lived under theruined chapel in Burgess Woods, and the kid came to life in the real world.”

I don’t think that anyone could say that they don’t find this book visually impressive.  McKean’s illustrations – black jagged lines with a simple, earthy colour palette – is very effective, and perfectly complements Almond’s edgy short story.  Here’s a glimpse inside the book:

The storyline is clever and interesting, yet I find it left a bittersweet taste in my mouth; after all, violence and grief form the backbone of the book.  The best example is the wild savage himself, who begins life as a manifestation of the young narrator’s grief over losing his father.  As Blue gets more and more obsessed with writing about him, the reader gets more and more concerned for the child’s well-being.

The book was enjoyable, but something holds me back from giving it five stars; despite its best intentions, I wasn’t hugely moved by the reading experience, and most of my four star rating goes towards the artwork.